Naples, Fla. – Buoyed by a closing round of 2-under-par from Connor HoweGeorgia Tech held off challenges from Florida and Wake Forest Tuesday to capture an eight-stroke victory at The Calusa Cup. Bartley Forresterdespite a closing round of 75, finished with a share of medalist honors for the second time in his career.

In capturing its fourth tournament victory of the 2021-22 year, this edition of the Yellow Jackets becomes the 13th to win four or more tournaments in one year, nine of those under head coach Bruce Heppler. The victory is the 69th for Tech in 26-plus years under the Hall of Fame coach.

Tech, ranked 11th in the nation, beat a small, but heavyweight field that included the No. 16 Gators, the No. 17 Demon Deacons, No. 1 Oklahoma and No. 8 Georgia, as well as top-25 teams Purdue and Clemson.

Forrester, who also was the co-medalist at the 2020 Puerto Rico Classic his freshman year, led four Yellow Jackets finishing among the top 15 individuals. sophomore Christo Lamprecht tied for fourth for his fifth top-10 finish in nine events this year, while senior Ben Smith tied for 11th place and junior Connor Howe tied for 13th.

TECH LINEUP – Facing a five-stroke deficit after 18 holes, Georgia Tech played a strong back nine in the completion of round 2 Tuesday morning to ascend to the lead alone, then played steady golf throughout the third and final round. Tech birdied 15 holes collectively in the back nine Tuesday morning after round 2 resumed. The Yellow Jackets Tech got birds from Lamprecht, Forrester and Smith and an eagle from Howe at the par-5 18th hole to finish the round strong at 10-under-par (3-under-par 285 for the round) and take a three-stroke lead over Wake Forest.

The Jackets, holding on to a four-shot lead playing the final holes, repeated the feat in the closing round with birds on the final hole from Howe, Smith, Lamprecht and Forrester to win going away. Tech posted a 2-over-par round of 290.

In capturing a share of his second collegiate victory, Forrester posted scores of 70-75 on Tuesday. The junior from Gainesville, Ga., completed 54 holes at 5-under-par 211. Lamprecht, a sophomore from George, South Africa, posted a pair of even-par 72s Tuesday to finish at 2-under-par 142, good to tie for fourth place.

Howe overcame an opening 78 to finish with rounds of 71-70. The junior from Ogden, Utah, recorded three birdies and a single bogey to pace the Yellow Jackets in the third round and tied for 13th place at 3-over-par 219. Smith, a senior from Novi, Mich., shot a pair of 73s and finished with a 2-over-par total of 218, tying for 11th place.

Bartley Forrester won a share of the individual title for the second time in his collegiate career.

TEAM LEADERBOARD – The final round became a three-team race between Tech, Florida and Wake Forest. Even with a 2-over-par third-round score, Georgia Tech played one of the steadier rounds of the afternoon and finished 54 holes at 8-under-par 856.

Florida played the front nine in 3-under-par, but finished at even-par for the third round and even-par 864 for the tournament. Wake Forest also was under par at the turn in round 3 but posted a 12-over-par round of 300 and finished in third place at 868 (+4).

INDIVIDUAL LEADERBOARD – Georgia Tech’s Bartley Forrester began the tournament No. 117 nationally in the Golfstat rankings, and outplayed a 45-player field that included 17 players ranked among Golfstat’s top 100. The junior from Gainesville, Ga., shot rounds of 66-70-75 for a 5-under-par total of 211 , tied with Florida’s Fred Biondi, the nation’s No. 3-ranked player.

no. 33 Michael Brennan of Wake Forest finished solo third at 4-under-par 212. Tech’s Christo Lamprecht, ranked No. 37, tied for fourth at 2-under-par 214 with N0. 12 Trent Phillips of Georgia and No. 19 Jacob Bridgman of Clemson. 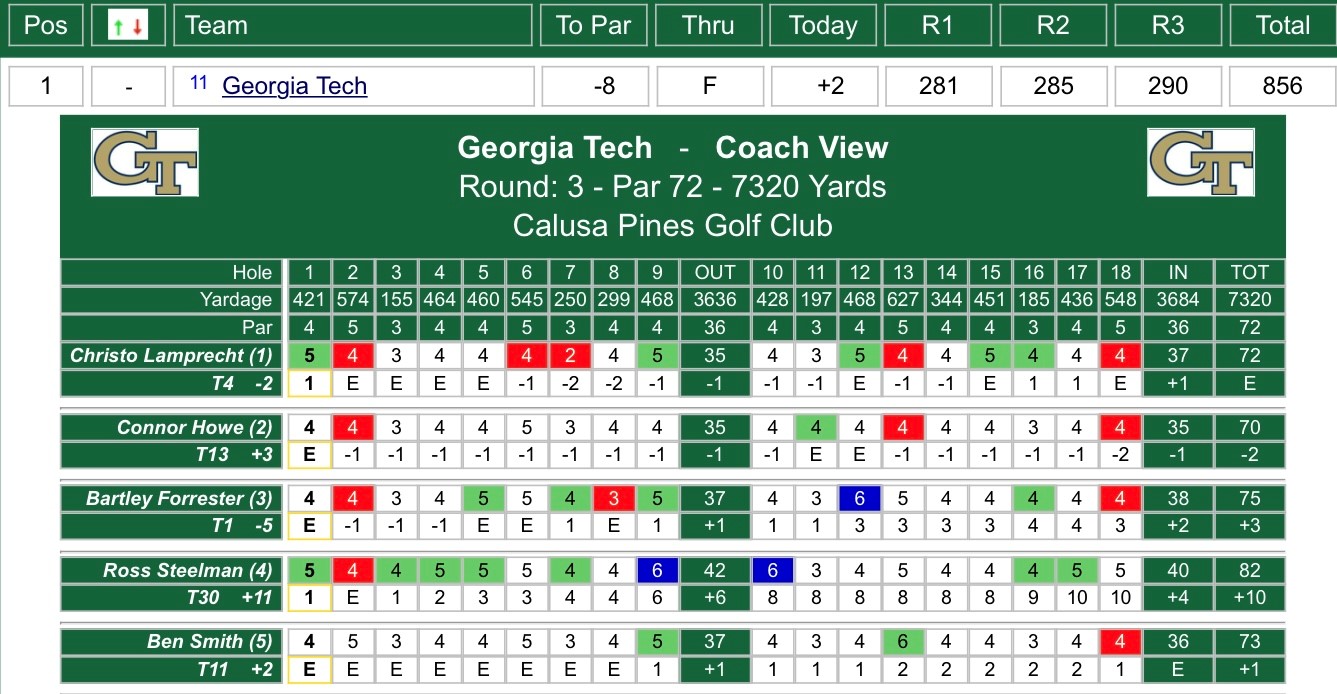 TOURNAMENT INFORMATION – Georgia Tech has recorded a win and a runner-up finish in the Calusa Cup in its first two years of existence. The event featured a small, but strong field with seven of the nine teams currently residing in the top 25 of the Golfstat rankings, including No. 1 Oklahoma, No. 8 Georgia, No. 11 Georgia Tech, No. 16 Florida, No. 17 Wake Forest, No. 22 Clemson, No. 23 Purdue, Iowa and Marquette. Seventeen of the nation’s top 100 players were in the field.

The tournament is contested at Calusa Country Club, which measures 7,320 yards and plays to a par of 72. Each team had five players competing with the low four scores counting toward the team total each day, and the tournament will be 54 holes, 18 each on Sunday, Monday and Tuesday.

“I’m really proud of this group for the way they handled the conditions today. We learned to manage some really difficult conditions, really windy, greens were running 13-14. We showed a lot of progress today and in this tournament. They ‘re all excited and I can’t blame them. Bart has come a long way this year and deserved to win. Christo played well start to finish. Connor shook off a poor first day and gave us two really good rounds to help us win “

Georgia Tech’s golf team is in its 27th year under head coach Bruce Heppler, winning 69 tournaments in his tenure. The Yellow Jackets have won 18 Atlantic Coast Conference Championships, made 29 appearances in the NCAA Championship and been the national runner-up four times. Connect with Georgia Tech Golf on social media by liking their Facebook page, or following on Twitter (@GTGolf) and Instagram. For more information on Tech golf, visit Ramblinwreck.com.