THE FLATS – Getting its final competition tune-up before the Atlantic Coast Conference Championship later this month, Georgia Tech’s golf team heads to Florida this weekend to play in the second Calusa Cup tournament in Naples, Fla. The event begins Sunday and runs through Tuesday.

With three victories in eight events during the 2021-22 year and posting a tie for sixth place at The Goodwin last week, the Yellow Jackets remain No. 11 in this week’s Golfstat rankings and the Bushnell Coaches poll, and No. 13 in the Golfweek/Sagarin Index. Head coach Bruce Heppler’s Tech squad is one of seven top-25 teams in the limited nine-team field.

TOURNAMENT INFORMATION – Georgia Tech competed in the inaugural Calusa Cup last spring and earned a runner-up finish behind top-ranked Oklahoma. The event features a limited, but strong field with seven of the nine teams currently residing in the top 25 of the Golfstat rankings, including No. 1 Oklahoma, No. 8 Georgia, No. 11 Georgia Tech, No. 16 Florida, No. 17 Wake Forest, No. 22 Clemson, No. 23 Purdue, Iowa and Marquette. Seventeen of the nation’s top 100 players are in the field.

The tournament is contested at Calusa Country Club, which measures 7,203 yards and plays to a par of 72. Play begins at 12:30 pm Eastern time Sunday and Monday, with the final round starting at 8 am Tuesday. Each team will have five players competing with the low four scores counting toward the team total each day, and the tournament will be 54 holes, 18 each on Sunday, Monday and Tuesday.

Christo Lamprecht earned his fourth top-10 finish of the eat last time out at The Goodwin.

Each of the Yellow Jackets except Reuter and Smith have at least two top-10 finishes this year, and three Tech players are listed among Golfstat’s top 75 players nationally. Horse No. 37, Lamprecht holds the highest Golfstat ranking among the Yellow Jackets following his tie for eighth place at The Goodwin. He is followed by Howe (No. 85) and Forrester (No. 117). 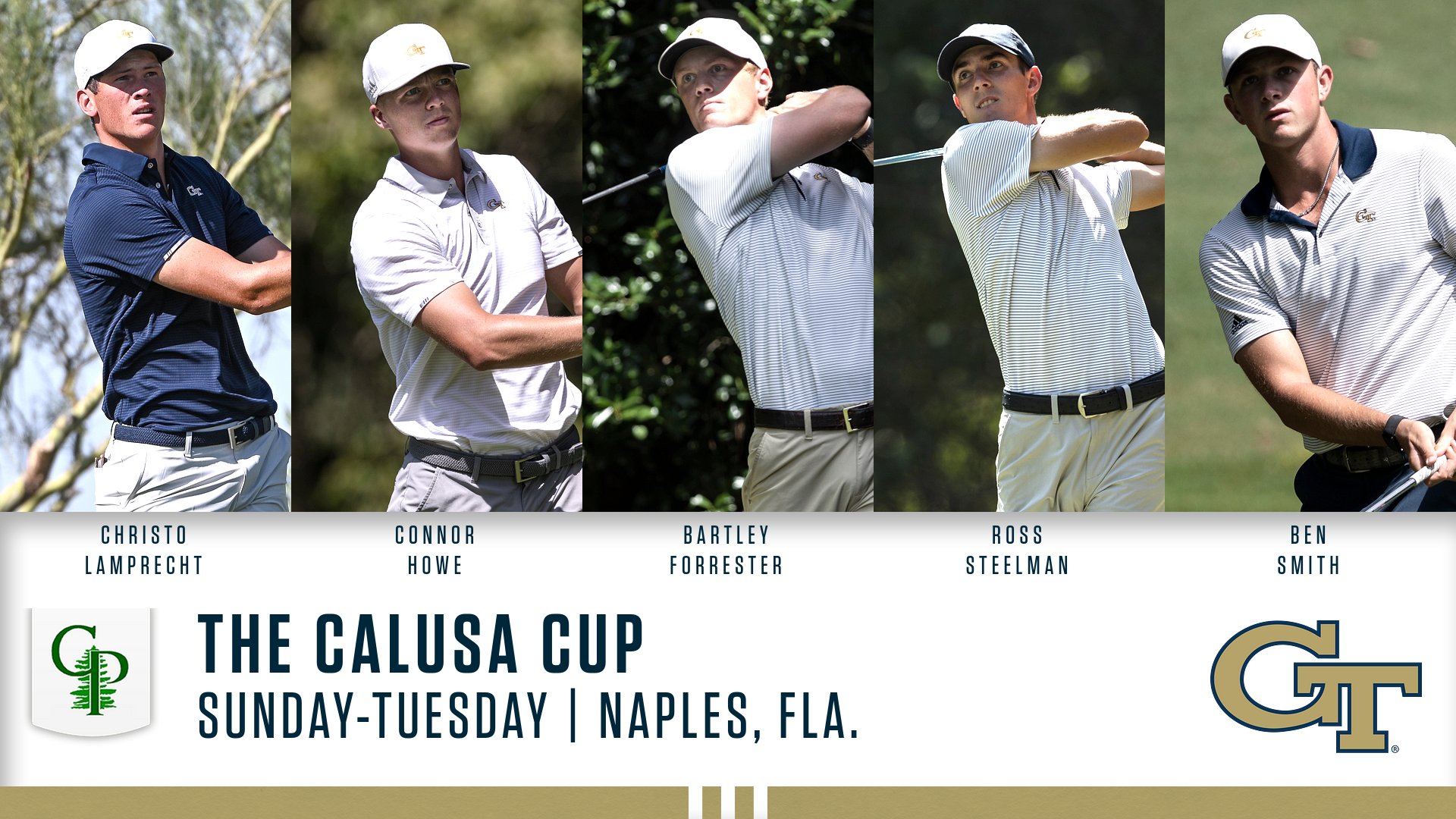 TECH LINEUP – Due to the illness to junior Ross SteelmanTech’s lineup undergoes its first significant change of the spring. Sophomore Christo Lamprecht and juniors Connor Howe and Bartley Forrester, all ranked among the Golfstat top 150, are joined by senior Ben Smith and freshman Benjamin Reuter in the lineup for The Goodwin, while junior Andy Mao (Johns Creek, Ga.) gets his first start of the spring as an individual after winning qualifying.

Christo Lamprecht (Sophomore, George, South Africa) – Tallest player ever in Tech program at 6-foot-8 … Four top-10 finishes this year in eight events, including a tie for eighth (203, -7) at The Goodwin and a tie for second at the Southern Highlands Collegiate ( 205, -11) in Tech’s last two events … Tied for 42nd at Tech’s spring opener (Amer Ari Intercollegiate) and 23rd at the Watersound Invitational … Tops among the Jacket regulars in stroke average at an even 69.71 over 24 rounds … Currently ranked No. 37 by Golfstat and No. 47 the Golfweek/Sagarin Index … No. 80 in the World Amateur Golf Ranking and No. 68 in the Scratch Players World Amateur Ranking… In the fall, he was runner-up at the Maui Jim Intercollegiate with a program-record 54-hole score of 194 (-16), tied for 10th at the Windon Memorial and 14th at the Hamptons Intercollegiate.

Connor Howe (Junior, Ogden, Utah) – Two top-10 finishes this year, and four other finishes in the top 20 in eight events … Tied for 13th at the Watersound Invitational and 18th at the Southern Highlands Collegiate for his top finishes this spring … No. 2 on the team in stroke average at 70.46 across 24 rounds … Won the Patriot All-America Amateur tournament in December … Tied for 7th at the Windon Memorial Classic and the Hamptons Intercollegiate, and tied for 19th at the Maui Jim Intercollegiate in the fall … Ranks No. 57 in the PGA Tour University ranking, No. 85 by Golfstat and No. 81 in the Golfweek / Sagarin Index, the highest rankings of his career… T-5 at the Southern Amateur, T-7 at the Monroe Invitational and T-11 at the Dogwood Invitational last summer… No. 84 in the World Amateur Golf Ranking and No. 52 in the Scratch Players World Amateur Ranking.

Bartley Forrester (Junior, Gainesville, Ga.) – Having the best year of his career to this point, posting three top-10 finishes and two other top-20s in eight events … Last three events include a tie for 15th at The Goodwin (205, -5), tie for 18th at the Southern Highlands Collegiate (211, -5) and a tie for fourth at the Watersound Invitational (212, -4) … In the fall, tied for sixth place at the Maui Jim Intercollegiate competing as an individual (63 in the final round ) and seventh at the Hamptons Intercollegiate … No. 117 in the Golfstat ranking and No. 112 in the Golfweek / Sagarin Index, the highest positions of his career, and is No. 243 in the World Amateur Golf Ranking, N. 256 in the Scratch Players Amateur Ranking … Stroke average is an even 70.54 over 24 rounds … Qualified for the 2021 US Amateur and posted a T-20 at the Monroe Invitational last summer … Co-medalist the 2020 Puerto Rico Classic.

Ross Steelman (Junior, Columbia, Mo.) – Has four top-10 finishes in seven events this year, including a runner-up showing at the Watersound Invitational and a tie for eighth place at the Amer Ari Intercollegiate … Missed The Goodwin due to a bout with mononucleosis … Fourth among the Jacket regulars in stroke average at 71.05 over 21 rounds … Tied for ninth place at the Maui Jim Intercollegiate and was runner-up at the Hamptons Intercollegiate in the fall … Currently ranked No. 160 in Golfstat and No. 130 in the Golfweek/Sagarin Index … Also No. 38 in the World Amateur Golf Ranking and No. 43 in the Scratch Players World Amateur Ranking … Second-team All-Southeastern Conference last spring, ranked No. 28 national ranking in Golfstat … Tied for third at the 2021 NCAA Noblesville Regional, has two victories in his collegiate career … Reached the quarterfinals of the US Amateur last summer, along with a T-3 at the Monroe Invitational, T-11 at the Northeast Amateur.

Ben Smith (Senior, Novi, Mich.) – Rank No. 85 in the PGA Tour University ranking, No. 243 in the World Amateur Golf Ranking, No. 298 in the Scratch Players Amateur Ranking … Played twice this spring, tying for 40th most recently in a large field at The Goodwin … Started well at the Amer Ari Intercollegiate (71-71 competing as an individual), but fell back in the final round … Posted a high finish last fall of T21 at the Hamptons Intercollegiate … Has compiled a 72.11 stroke average over 15 rounds … T-8 at Monroe Invitational, T-10 at Northeast Amateur last summer … Tied for eighth at the NCAA Tallahassee Regional, and tied for ninth at the Calusa Cup last spring. 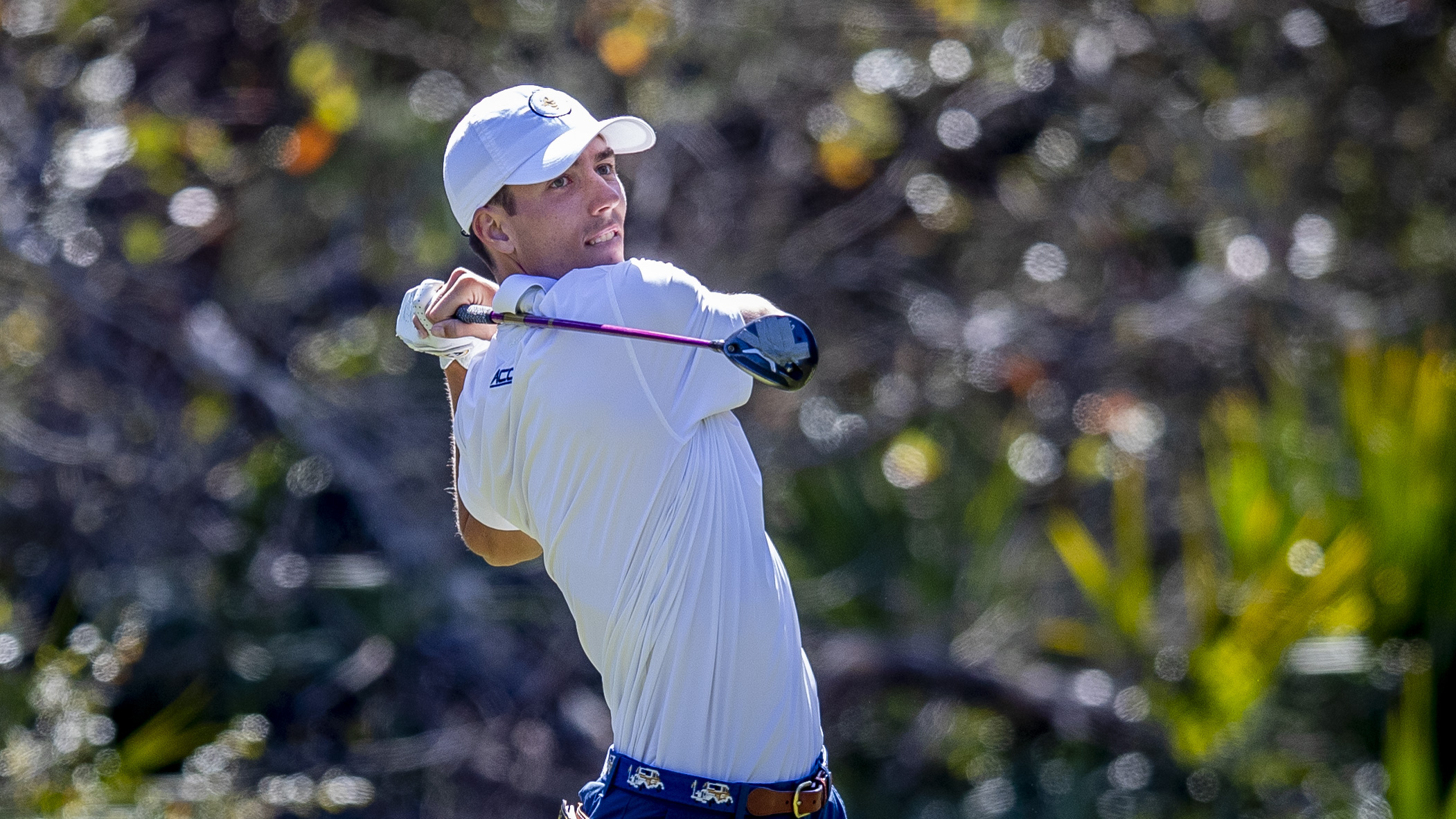 Ross Steelman returns to action after missing The Goodwin with mononucleosis.

Georgia Tech’s golf team is in its 27th year under head coach Bruce Heppler, winning 68 tournaments in his tenure. The Yellow Jackets have won 18 Atlantic Coast Conference Championships, made 29 appearances in the NCAA Championship and been the national runner-up four times. Connect with Georgia Tech Golf on social media by liking their Facebook page, or following on Twitter (@GTGolf) and Instagram. For more information on Tech golf, visit Ramblinwreck.com.